Fashion clash is a unique event in Maastricht where fashion designers collide with non-fashion designers. Fashion shows are open to the public resulting in a clash amongst visitors from different backgrounds and cultures. 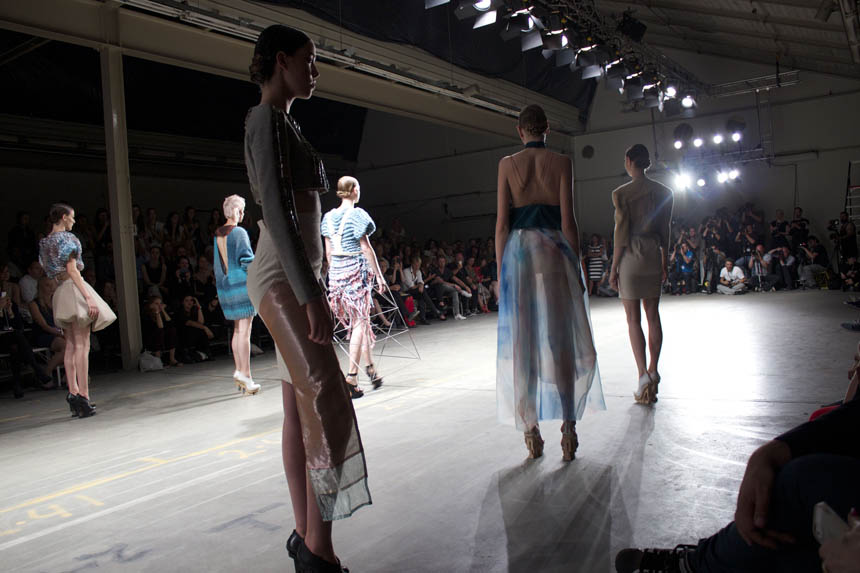 For the last six years, young designers, artists, journalists and visitors from all over the world have come together for one weekend in Maastricht, the Netherlands. FashionClash Festival has become bigger and bigger every year and So Catchy! Where Fashion Begins was lucky to join the sixth edition from June 13 – 15. The festival is unique in that it doesn’t focus solely on fashion shows with known designers; it gives a platform to those who are just starting out and to talented artists in the FashionClash Exhibition, such as Daniel Ramos Obregon, who we at So Catchy! had the pleasure to interview a while back. We also got to sit down with one of the co-founders and directors of the FashionClash festival, Branko Popovic, who gave us some insight into the development of the festival over the past few years.

The creators of the event, Branko Popovic, Laurens Hamacher and Nawie Kuiper, are all graduates of Fashion Design from the Maastricht Academy of Fine Arts and Design (MAFAD). According to Branko, “Maastricht is known for shopping, lifestyle and fashion. But after graduation all the students were leaving. You know, when you graduate, you don’t know what to do. You’re on your own, no one is there to help you and we had no platform. We really tried to make collections and show them to someone, but where? We saw the potential of Maastricht and decided to organize a fashion event in late 2008. Let’s just try it out, we thought. If nothing happens, I can always move to another city.” Before FashionClash Maastricht, Nawie and Branko had worked together on a development project in Brazil in 2006, a year after they graduated. There they had experienced a “powerful collaboration” as designers helping other designers. Branko: “The Brazilian project included an exhibition and needed a name, so we named it FashionClash Brazil. The name FashionClash is in itself interesting. We saw the opportunity to show off different cultures and disciplines and that fashion is not just clothing, but that you can express fashion in different ways.”

Laurens, Nawie and Branko, the creators of the festival

The first edition of FashionClash Maastricht in 2009 consequently included an exhibition and shows from designers from the Benelux region. Although it had a good opening, the shows were empty on some days. The second edition was more successful, attracting designers from 11 countries. Branko: “We thought the desire for a platform for young designers was our local problem and that other designers in the rest of the world were fine, but we were wrong. So I remember the second edition was suddenly full shows. It was then we realized we had gold in our hands. Year by year we stepped it up.”

In 2011 Branko, Nawie and Laurens decided that the core of Fashion Clash is the clash, meaning that the festival is not solely about presenting fashion shows, but about combining it with interesting artistic projects. For example, visitors can find pop up-exhibitions throughout the whole city. In the festival area, a larger exhibition is presented during the entire weekend and for the first time this year it was curated with a theme. The theme, ‘AGE’, was also reflected in this year’s collaboration with the Dutch Dance Festival. On Sunday, their ‘(Old)Fashion(ed) project came to life with models who were 65 and older wearing young designers’ work during a dance performance. On Saturday there were also performances by various Dutch Dance Academies, leaving the audience in awe of their diverse choreographies and outfits that even the dancers themselves seemed inspired by.

So Catchy!: How is this year’s theme, ‘AGE’, reflected in your audience?

Branko Popovic: Our event is open for everyone, unlike most Fashion Weeks, so everyone can buy a ticket. So there’s a clash of the audience as well. You see grandparents of designers, you see children, people who have never seen a fashion show in their life. If we want young designers to be really supported, then it has to have a broader audience. If you compare it to FashionClash 6 years ago, there was no public awareness of designers in this region. Now I see people coming every year and they now know how to look at fashion. So you are kind of training your audience to look at fashion design, show them that it’s not weird to buy a young designers clothing, especially when it’s sustainable and you know who made it. But it still takes years to change the mindset of the region. Maastricht is not a fashion capital, we had to start from scratch.

SC!: With so many talented young designers waiting to go on stage, how are you able to make a selection?

BP: We don’t want to impose on young designers; they have to be able to do what they want. Sustainability is something we support, every time there is a designer with an interesting sustainability story, it’s a plus. But the first thing we look at is of course, talent and potential. It starts from the way they present themselves during the application. When they apply, a lot of them just have drawings. This weekend is the first time I am seeing the collections, because we made our selections from the drawings. It’s quite risky, but what helps is that we are designers ourselves, so we know how to read the drawings. Ninety percent of the time we are right, so it’s never really a problem. Part two of the selection is that we are able to curate an interesting mix of designers. Designers can apply for all parts or just one part, meaning the show, the exhibition or the market. But sometimes we think a collection is not interesting enough for the show, so we say it is better for them to do the market, because they have a more commercial label that is not really show worthy.